That Sarah Palin, what a tease!

This book tour of hers is one of the all-time great hoochie coochie dances. The tea partiers are lining up like rubes at the “Direct from Gay Par-ee!” tent at the Dingleberry County Fair.

The star attraction knows that you may take it off, but you don’t take it all off. As governor, she left the stage when she still had her political pasties on. As “author,” she knows that the key is to take off just enough to keep the crowd transfixed and wanting more, but not so much as to stand revealed in all her nakedness.

I got this visual and it won't go away: Moosebreath twirlin' her rack-tassles, clockwise, then twitchin' her shoulders and they're goin' counter-clockwise, then givin' one shoulder a little twitch and gettin' 'em to contra-rotate like a Square Four's crankshaft. Bleach and Prozac, please, with just a twist of heroin...

It’s an index of the fog we’re in that Palin’s confrontational ignorance still feels refreshing to a lot of Americans. With waves of sullen anger rolling through the country, her stringent vitality, her media mistakes, her unpredictability, and her pert victimology at least give us a reality show everyone wants to watch.

Someday there’s going to be a Broadway musical about Sarah, maybe based on the book. I see Going Rogue! (the exclamation point will be a must) as a blockbuster in the tradition of Annie Get Your Gun, Gypsy, and Funny Girl. Or, come to think of it, Evita. Every 40-plus diva on both coasts will fight for the starring role. And there will be juicy parts for those cast as Todd, Bristol, and Levi.

What a hoot — except that this musical isn’t a comedy. Just by being out there again, Palin will fuel the tea party cranks, the talk-show ranters, and the suicidal wing of the GOP with the sheer force of her Q rating. To many people who feel marginalized and left behind, Palin’s brashness seems to represent clarity when in fact she represents ignorance. David Brooks might consider Sarah Palin “a joke” and “a potential talk-show host,” as he told George Stephanopoulos on Sunday. And he’s probably right that there’s no way she can actually get elected president. But that won’t necessarily stop her from getting the nomination. I have a persistent hallucination: Sarah Palin atop the GOP ticket in 2012, running with — yes, Lou Dobbs. Just to add a bit of gravitas.

Tina, stay away from the 'Brown' acid... 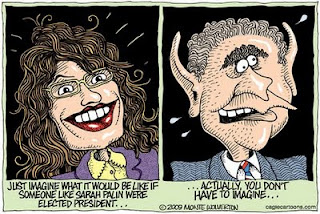 Posted by Gordon at 12:53
Email ThisBlogThis!Share to TwitterShare to FacebookShare to Pinterest