The lady is a tramp 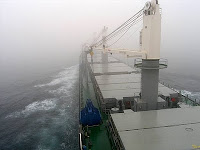 A wonderfully metaphorical photo of life's journey into the mists of the future. The end of it all being Cleveland brings it back down to Earth. Ho-hum.

A different kind of sea cruise.

We were somewhere near Newfoundland, crossing the turbulent North Atlantic on a freighter and bound for Cleveland - two things not at the top of everyone's to-do list - along with 19 Polish crewmates and 22,000 tons of steel. My wife and I had boarded the Isadora in IJmuiden, Netherlands, committing to the 16-day voyage in large part because, frankly, I'm afraid to fly. (We had circled the globe using only ground transport, and I was determined to finish without becoming airborne.)

There also was an element of romance: experiencing the sea without the distractions - all-you-can-eat buffets, belly-flop contests, tuxedo dinners with the captain and cheesy lounge acts - that come with typical cruises. The only promises on the Isadora were fresh air, relaxation, hearty Polish meals in the company of the crew and an appreciation for hardworking seafarers.

And, of course, adventure.

"Not exactly the Queen Mary," deadpanned my wife upon seeing the Isadora for the first time, confirming that my enthusiasm for the trip was not as contagious as I'd hoped.

The Isadora is considered a "tramp" freighter because the company sells her services to the highest bidder; after unloading the steel in Cleveland, the bosses would entertain all offers. Returning empty was not an option. As with many other freighters, the Isadora runs a side business carrying a few travelers, although passengers aren't exactly revenue generators. (The ship burns $500 in fuel every hour. That's about six hours on our dime.)

While my wife was concerned about pirates (I explained that Somalia is halfway around the world), I was more worried about seasickness, especially after the first mate explained that our cargo of steel causes the ship to roll more in the open ocean.

That night, after a dinner of freshly baked rye bread, pork cutlets and sauerkraut, the captain invited us to his cabin to sample Polish culture (specifically, Polish vodka) and listen to American jazz. The cabin swayed as we made conversation, the captain topped our glasses with spirits from his homeland and Dave Brubeck jammed through the speakers.

You don't get nights like this on a Carnival ship.

I think that last sentence qualifies as a masterpiece of understatement!

In the end, I didn't suffer mal de mer nor were we hijacked, but we did have an adventure that we agreed was the best of our global jaunt. (Although it's unlikely that beef tongue, pickled herring and tripe soup will find their way unto my plate anytime soon.)

"Maybe not a queen but certainly a lady," I said.

Much more, including how to book passage.

An actual working merchantman where you're one of eight passengers instead of one of 1600 on a floating amusement park. Or 6000. Or, soon probably, 10,000. Polish food (yum!) and Dave Brubeck in the skipper's cabin beats the crap outta the manufactured distractions on regular cruises. Meaning no offense to anyone, that means you, Mr. and Mrs. Fixer, and to each their own, that's my opinion. Just sayin'.

Granted, the ports of call (Cleveland; Burns Harbor, Ill.; and, occasionally, Duluth, Minn., and Milwaukee) aren't quite as exciting as on the normal cruises, but then, the trip's the thing.

I find this concept oddly appealing. One of the beautiful things about being out on the sea is simply being out on the sea. On my two cruises, I spent a lot of time leaning on the rail watching Mother Ocean, mostly because there wasn't much else to do besides mess duty which totally sucks at sea. For $1800 a head, cheap for 16 days, I expect someone else to cook & clean and leave me free to gaze at my navel and contemplate the vastness of it all. And eat Polish food.

Mrs. G says this is OK with her as long as as the aftereffects of all that cabbage wafts aft and off the fantail.

One ship I do not think I will consider for a cruise is this one.
Posted by Gordon at 13:29
Email ThisBlogThis!Share to TwitterShare to FacebookShare to Pinterest