And how was your weekend? 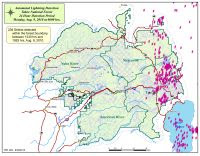 Only one small fire was detected on the TNF near Boca Reservoir. Additional fires, if any, are being located by an airplane doing reconnaissance flights this morning.

If you look at the larger map you will see two roads leading north from Lake Tahoe. I live in between them a little south of where SR267 intersects with I-80. The area is known as 'The Sawtooth' probably because of its shape and there is virtually nothing but pine forest south of my 'hood for the 12 or so miles to the lake. There's a wonderful network of dirt roads capable of supporting high-speed motorcycling. My tax dollars at play. It also supports logging trucks so you have to be a little careful. "Hear the Jake, hit the brake!" But I digress.

We could hear the thunderstorm coming. It got closer and closer 'til me 'n the pups were sharing quality time under the couch. Not scared, of course. I like to play with them and lured them under there with a ham sandwich. The lightning and its thunder became simultaneous and LOUD! At one point I was looking out the window and saw an orange flash as lightning hit a tree a coupla hundred feet from my house. Normally I would go investigate for fire, but a) Mrs. G in her wisdom said to not go walking in the woods during a lightning storm, and b) it was raining like a cow pissin' on a flat rock, so I didn't worry about fire very much.

Thunderstorms are quite common around here between May and September, but they don't always come this close. There have been almost 10,000 lightning strikes in California in the last coupla months.

The rain abated and the storm moved on, but it was an exciting coupla hours. Today dawned misty and eerie and now it's beautiful out and cooler than normal. Just another day in Paradise.
Posted by Gordon at 13:59
Email ThisBlogThis!Share to TwitterShare to FacebookShare to Pinterest