Under the red maple tree ...

All my dogs come home.

I was telling the Mrs. just the other day that I wish, for the first time, a dog of mine would die from natural causes, as opposed to me having to make the decision to put them down. As someone who's dealt (and still deals) with PTSD, it's not a good position to be in (I haven't slept right since we had to put Shayna down).

I'm not one to let the vet dispose of my animals, I bring them home. Hey, for all the loyalty they showed me, I believe I should give them an exalted place to rest. Thing is, there's a law in NYC and Long Island that you can't bury remains in your yard, only ashes. A law I choose not to recognize.

For those who don't know, I live in the house I grew up in; moved back after mom passed. All my pets have been buried at the back of the property; the dogs under the red maple tree. We chose this spot because George, my German Shepherd Dog who was with me throughout my military service (who was 18 when I had to put her down) liked to take a leak under the maple. Hey, I'm sentimental. The Mrs. laughs and says that if anyone dug the place up, they'd think it was the location of a Stephen King novel.

Back to the law. I try to give them a place of reverence, but I don't want anyone to think it looks like a graveyard. At least, I don't want to make it too obvious. So this is what I came up with. Yes, it looks big enough to have a human body under there, but I count on the fact I have my neighbors terrified and they won't ask themselves too many questions as they look over the fence. I also don't put up headstones (why not?) so I'm cryptic. George is marked by the old stone (on the left), Shayna by the new. 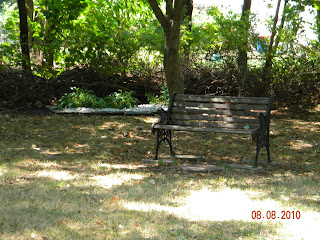 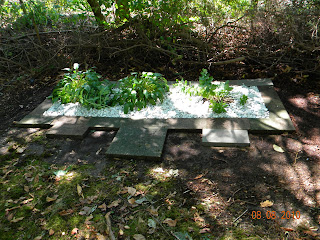 Call me crazy but I like to know the animals who were so loyal to me are tucked in all cozy at their time of rest. George and Shayna are nose to nose.

I got the grave (I had to enlarge it) finished this afternoon. I betcha I'll sleep like the dead (bad choice of words) tonight.
Posted by Fixer at 16:37
Email ThisBlogThis!Share to TwitterShare to FacebookShare to Pinterest