The Party of National Security? 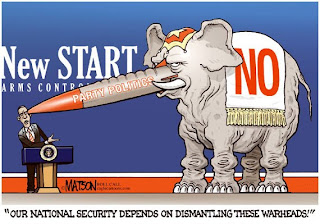 The first sentence in this NYTimes editorial is also a Quote of the Day:

The world’s nuclear wannabes, starting with Iran, should send a thank you note to Senator Jon Kyl. After months of negotiations with the White House, he has decided to try to block the lame-duck Senate from ratifying the New Start arms control treaty.

The treaty is so central to this country’s national security, and the objections from Mr. Kyl — and apparently the whole Republican leadership — are so absurd that the only explanation is their limitless desire to deny President Obama any legislative success.

The Republicans like to claim that they are the party of national security. We can only hope that other senators in the party will decide that the nation’s security interests must trump political maneuvering.

I'm sure they will claim that reducing our nuclear arms from 2,200 to 1,550 and allowing the Russkies to verify is a Kenyan Muslim Communist plot.

And since when do the nation's security interests trump political maneuvering? It's a quaint idea but not Repug policy.

Posted by Gordon at 11:01
Email ThisBlogThis!Share to TwitterShare to FacebookShare to Pinterest