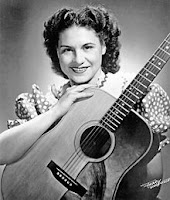 The worst part of getting old is that all the folks I grew up listening to are passing.

Kitty Wells was one of the first women to have a significant effect on country music. She had a No. 1 hit with 'It Wasn't God Who Made Honky Tonk Angels' in 1952.
...

Mostly she was interested in the $125 union scale pay she'd get for the session, at which she recorded "It Wasn't God Who Made Honky Tonk Angels," a song that not only turned her career around but also helped upend stereotypical thinking about men who strayed and the women they strayed with.
...

The stern resolution in her voice would be echoed in subsequent recordings by Patsy Cline, Loretta Lynn, Tammy Wynette, Dolly Parton, Emmylou Harris on through Shania Twain and the Dixie Chicks and still ripples today in assertive songs by Taylor Swift, Miranda Lambert and Carrie Underwood.

"Kitty Wells was my hero," Lynn said Monday in a statement. "If I had never heard Kitty Wells sing, I don't think I would have been a singer myself."

Godspeed, Mrs. Wright.
Posted by Gordon at 15:28
Email ThisBlogThis!Share to TwitterShare to FacebookShare to Pinterest

Me and the Mrs. were talking about that the other day, when Andy Griffith died. All the folks we grew up watching are going.

Yeah, watching too. The circle of life rolls on.