From Jude at First Draft:

As part of my job, I talked to a young man today who had recently been fired. He is 26 years old. We sent him to Iraq when he was 19 years old. Yes, "we." You and I. Everyone who lives in the United States of America sent him there. And he got broken. Ruined. He has post-traumatic stress disorder and a traumatic brain injury that you and I are responsible for. He did not incur those injuries defending our freedoms, or securing weapons of mass destruction, or "fighting them there so we won't have to fight them here," or any of the other reasons we were told that we had to send young men and women to Iraq.

We sent him to go get ruined for the biggest bunch of bullshit I've ever seen in my entire life.

And ruined is exactly what he is. He got fired from a job for some chickenshit reason. That was the longest employment he'd had since returning to the States in 2006. He'd worked there 17 months. He can't remember things on a day-to-day basis. He has problems dealing with what most of us would think are simple situations. He gets very nervous when he hears sudden, loud noises. And his wife has to help him with what you and I would think are simple tasks.

We did this to him. We ruined him. We destroyed his life and the lives of those who care for him and deal with his disabilities on a daily basis.

After the vote, at midday on Wednesday, Patty Murray, chairman of the Senate veterans affairs committee, accused Senate Republicans of "shocking and shameful" obstructive politics.

She said: "At a time when one in four young veterans are unemployed, Republicans should have been able, for just this once, to put aside the politics of obstruction and to help these men and women provide for their families.

"It's unbelievable that even after more than a decade of war many Republicans still will not acknowledge that the treatment of our veterans is a cost of war. Today they voted down a fully paid-for bill that included bipartisan ideas to put veterans in jobs that will allow them to serve their communities. Jobs that would have helped provide veterans with the self-esteem that is so critical to their successful transition home."

You can thank these assholes. 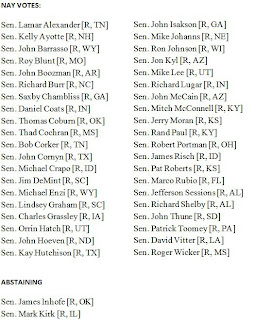 Posted by Fixer at 09:35
Email ThisBlogThis!Share to TwitterShare to FacebookShare to Pinterest

With flaming pineapples or cactus plants.

I say place a guillotine in the National Mall. Put a huge sign on the front that says: "Free haircuts for Senators and Representatives. No lines, no waiting, first come, first served. Sponsored by the People of the United States"

It's so maddening, but until the Pubes pay a price, and they won't because "FREEDUMB!", it won't change or get better. This guy is one of Mitt's 47% moochers, looters and parasites.

Thanks for the article. David Aquarius, I was about to drink a cup of coffee when I read your comment. Thank goodness I refrained as I would have showered the keyboard, mouse and monitor with excess liquid from lol.