Over? Who says it's over? The hell it is! 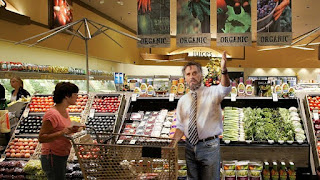 Do not miss this one! From America's Finest News Source.

CANTON, OH—According to eyewitnesses at the scene, an unkempt and thoroughly disheveled Mitt Romney gave an impassioned campaign speech Monday to a group of bewildered shoppers inside a local Safeway.

Sources confirmed the filth-covered former presidential candidate walked into the store unannounced early yesterday evening, went to the store’s cereal aisle, and started to play Kid Rock’s “Born Free” on a portable boom box, enthusiastically waving and pointing to no one in particular.
...

Witnesses told reporters that Romney walked around the store barefoot as he gave his speech, wearing only a pair of dirt-caked jeans and a wrinkled dress shirt covered in food stains.

Sources said a weeping Ann Romney at one point attempted to pull her husband out of the store by his arm but was angrily rebuffed, with the 65-year-old retired businessman yelling that he was “trying to do [his] job here.”
...

According to reports, Safeway employees finally called local authorities when Romney attempted to grab an infant from the arms of her mother “for a quick photo op.”

After three police officers managed, with some effort, to subdue Romney in the produce section, he could be heard shrieking incoherently at the top of his lungs for several moments before he finally trailed off, muttering about a plan to “create 12 million jobs by the end of [his] first term.”

“We’re going all the way to the White House!” Romney loudly proclaimed in the parking lot as he was gently guided into the back of a police car. “Thank you, God bless you, and God bless the United States of America!”

Yes, he's the last one to know. Derangement and delusion are probably no help. If I had any sympathy for the sonofabitch, which I don't, I'd feel sorry for him forever after being known as "Poor Willard. The loss unhinged him".

Willard's OK and so are the Obama Deranged, who are moving through the 5 stages of grief. They're already up to "anger" but I'm not sure they'll make it to "acceptance". The human life span is only so long, less in the states Willard won. Heh.
Posted by Gordon at 14:08
Email ThisBlogThis!Share to TwitterShare to FacebookShare to Pinterest

"Was it over when the Germans bombed Pearl Harbor? Hell no!"