As Hurricane Rita approaches the Gulf Coast, North Shore Animal League America and DAD's Pet Care have joined forces to airlift approximately 100 animals rescued from shelters wrecked in Hurricane Katrina. The cats and dogs, who have been held in overcrowded and inadequate staging areas throughout Louisiana, Mississippi and Alabama, will be brought to North Shore Animal League America's headquarters in Port Washington, New York where they will be cared for and put up for adoption. The animals will be airlifted on Thursday, September 22 from Baton Rouge International Airport and arrive in New York at approximately 2:30 p.m. (ET).

Long Islanders doing their part. People say we should be concerned less about the pets and more about the people. I say, if you can turn your back on our best friends, you've lost your humanity and your soul.

North Shore Animal League America, located in Port Washington, New York, is the largest no-kill animal shelter in the U.S. Founded in 1944, the League has found loving homes for close to one million dogs, cats, kittens and puppies. More information on the League, its efforts in the Gulf Coast and/or to adopt one of the animals left homeless by Hurricane Katrina, can visit www.nsalamerica.org.

Our Princess Shayna is an NSAL alumnus. They're located about 5 miles from where I work and some of the staff are our customers. They do rescue work all over the country in all sorts of conditions. If you've got a couple bucks, stop by their website and help out. 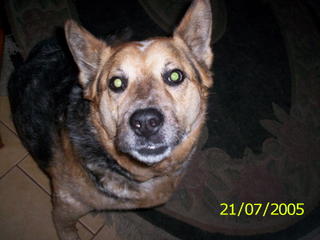 Princess Shayna says George W. Bush is the worst President ever and all dogs and cats should stand up with their humans to oppose his policies. Shayna also sends out a bark and a tail-wag to Harry Hound.
Posted by Fixer at 04:24
Email ThisBlogThis!Share to TwitterShare to FacebookShare to Pinterest