I have a lot of these "for Dummies" books. They had me in mind when they came up with the format. Here's one from Bob Geiger: 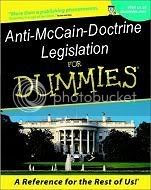 It gets hard to keep track of all this stuff, doesn't it?

When we have a President of the United States doing so many things wrong, for so long and we finally get a Democratic Congress that will actually take their oversight responsibilities seriously, well, the bills start flying faster than Dick Cheney can say "go f*** yourself" to Senator Patrick Leahy.

So let me clear up what's happening in the Senate where, at press time, we have three pieces of legislation that seek to neuter George W. Bush's ability to escalate the Iraq war.

Clear it up he does. Go read.

So, to wrap up: The Biden-Hagel-Levin resolution doesn't say enough and, with Congress speaking to a president who doesn't listen and doesn't care, it's more symbolic than anything that will truly make a difference. Senator Kennedy has shown commendable leadership on this issue, but his amendment relies on the more complex mechanism of cutting funding -- and it may not even stop the surge if Bush can get the money from somewhere else in the Defense Department budget.

I'll keep you posted on when any of these come up for a vote but I like the Dodd bill... It's forceful, simple, direct and doesn't involve questions of funding an escalation. It just says no more troops to Iraq - period.

And isn't that what the American people are saying?

Uh, yup.
Posted by Gordon at 13:17
Email ThisBlogThis!Share to TwitterShare to FacebookShare to Pinterest