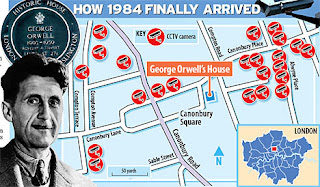 Disturbing, but not surprising - Big Brother has more than a dozen cameras near George Orwell's London flat.

On the wall outside his former residence - flat number 27B - where Orwell lived until his death in 1950, an historical plaque commemorates the anti-authoritarian author. And within 200 yards of the flat, there are 32 CCTV cameras, scanning every move.

Orwell's view of the tree-filled gardens outside the flat is under 24-hour surveillance from two cameras perched on traffic lights.

The flat's rear windows are constantly viewed from two more security cameras outside a conference centre in Canonbury Place.

In a lane, just off the square, close to Orwell's favourite pub, the Compton Arms, a camera at the rear of a car dealership records every person entering or leaving the pub.

Within a 200-yard radius of the flat, there are another 28 CCTV cameras, together with hundreds of private, remote-controlled security cameras used to scrutinise visitors to homes, shops and offices."

Story via BoingBoing.
Posted by Morrigan at 09:21
Email ThisBlogThis!Share to TwitterShare to FacebookShare to Pinterest