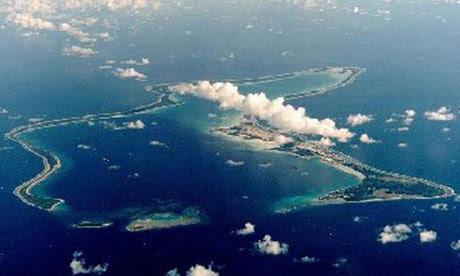 Two British human rights campaigners have been arrested at sea off Diego Garcia in the Indian Ocean after protesting against the island's use in British and US military operations. The two men were demonstrating against the island's admitted use by the US for rendition flights and the historic removal of the Chagos islanders from their homes nearly 40 years ago.

1) You have to really, really! want to protest something to go to that godforsaken speck of shit!

2) You have to get arrested before anybody would even know you were there.

I agree with their protest, but it's really pretty useless, like shovelin' shit against the tide. I think these guys are lucky that the arrestors didn't just sink 'em with gunfire and then shrug, "What protesters?".
Posted by Gordon at 12:52
Email ThisBlogThis!Share to TwitterShare to FacebookShare to Pinterest