On Friday June 24th at about 11:30 pm, two Sierra County deputy sheriff’s located and made an arrest on the suspect who struck five cows, ran over a cattle dog and threatened to run over several riders on horseback during a cattle drive last week in Pike City.

The suspect remains in custody in the Sierra County Jail in Downieville. Bail is set at $100,000. The suspect is 19 year-old Justin Philip Lombardobarton of Camptonville. His current charges are: P.C. 245 (a)(1) Assault with a Deadly Weapon, P.C. 597(a)(1) Animal Cruelty and P.C. 594(b)(1) Vandalism of Property. Additional charges may follow.

Additional charges may include Being An Asshole, with priors.

Maggie the cattle dog is on the mend (conehead photo), and I was wrong about Sierra County not having its own jail, but apparently it doesn't amount to much although this is heartwarming: 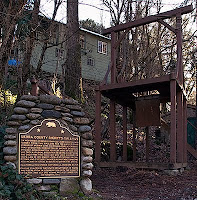 I'm sure Maggie will be glad to clean up after her attacker drops through the trap door.

You can read the plaque here.
Posted by Gordon at 13:35
Email ThisBlogThis!Share to TwitterShare to FacebookShare to Pinterest

Back in the old days, that gallows would have gotten use in this case -- who needs a jail when you got a gallows, after all? Sadly, at worst this kid's gonna get a few months jail time then probation.

No gallows necessary, but a gelding might be sufficient.

... this kid's gonna get a few months jail time then probation.

Somehow, I think he'll get a good "talking to" after he gets out. I'd "talk" to him after he almost killed my dog and my livestock. Then I'd let the dog have what's left. Sounds like it's pretty rural out there. I'm sure people wouldn't care much if a meth head went missing up in the hills.