A woman I've been fond of (smart, independent, beautiful) for the better part of 20 years (who would run a close second to Mrs. F) has been named head of the IMF, replacing the alleged rapist.

The International Monetary Fund’s Executive Board selected Christine Lagarde to succeed Dominique Strauss-Kahn in the post of Managing Director and Chairman of the Board for a five-year term.

With the former French Finance Minister taking the top seat, the IMF continues its tradition of European leadership, relegating Mexican Central Banker Agustin Carstens who didn’t manage to win the support of fellow emerging market economies Brazil, Russia, and China. Lagarde will become the first woman to head the Fund since its inception in 1944. (Read Emily Lambert’s analysis of Lagarde’s fashion sense, The New IMF Leader And The Leather Pants). 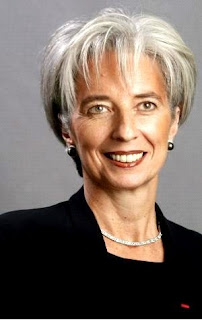