Obama does not understand "bully dynamics"

Good piece by the Legal Schnauzer

Why has Barack Obama been such a disappointment to many progressives? More importantly, why has he failed the country in a time of crisis?

It's largely because Obama does not understand how bullies operate, according to a prominent political psychologist. [...]

The president is fond of referring to “the arc of history,” paraphrasing the Rev. Dr. Martin Luther King Jr.’s famous statement that “the arc of the moral universe is long, but it bends toward justice.” But with his deep-seated aversion to conflict and his profound failure to understand bully dynamics — in which conciliation is always the wrong course of action, because bullies perceive it as weakness and just punch harder the next time — he has broken that arc and has likely bent it backward for at least a generation.

The arc of history does not bend toward justice through capitulation cast as compromise. [...]

Fixer and I have expounded at some length on how - the only way - to deal with bullies and no doubt will continue to do so until somebody does it to the far right. They have to find themselves unexpectedly sitting on their ass with a bloody nose and an incipient two-week raccoon mask shiner that'll make people laugh at 'em and tell 'em they got what was coming to 'em and give 'em something to think about when they look in the mirror. If that doesn't work, the next time you hurt 'em. Repeat as necessary until they stop fuckin' with you. Make it so they step off the curb when they see you coming down the sidewalk. Comity and respect are fine but fear works just as well. 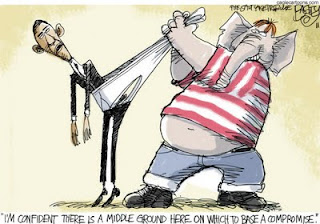 Posted by Gordon at 14:07
Email ThisBlogThis!Share to TwitterShare to FacebookShare to Pinterest

Hear, hear. Dealing with bullies is simple - I guess that's why the Academic in Chief doesn't get it - beat 'em until they leave you alone. Don't matter how you do it, just do it.

The arc of history is a middle finger pointing inward.

Dude, you still don't get it. Obama is an Establishment DLC Democrat not that transformational politician he advertised himself as.

Obama will go down as the best Republican president since Bill Clinton.

I'm with you guys on the bully takedown, but where to begin ... who picks on Obama the most?

He's got so many enemies taking so many cheap shots that he can't go it alone.

It's like West Side Story, 10 of them have one of our guys agains the fence, just wailing on him.

Do we tell our guy to fight harder himself or do we do what Gordon says and beat a little fear into them? What kind of a gang are we?

Sharks, Jets, who's with me, all of us will be needed to take on all of them. Let's get ready to rumble!

When yer a Jet, yer a Jet all the way, from yer very first breath 'til yer last dying day. Did I remember that right?

I had to Youtube the video and boy could it apply to Obama and us, his gang. Here it is:

Except of course, we like Puerto Ricans and our "Sharks" are Repubs.