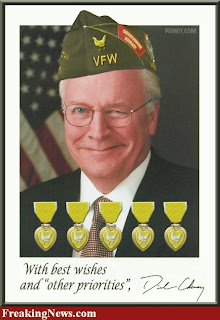 King of the Chickenhawks

Many of the usual suspects who pissed their pants at the thought of service and possible personal danger, but this one is a rare moment of truth from one of their great statesmen about what they really think:

Henry Kissinger: Kissinger's take on our brave men and women in uniform? "Military men are just dumb, stupid animals to be used as pawns in foreign policy." -- Henry Kissinger, as quoted in "The Final Days" by Bob Woodward and Carl Bernstein in chapter 14. Page 194 in the paperback version (1995). Kissinger has never denied saying it.

There ya go.
Posted by Gordon at 14:38
Email ThisBlogThis!Share to TwitterShare to FacebookShare to Pinterest

My wife, who was with Conservation International at the time was in negotiations with the Freeport-McMoran environmental officer (in the early '90s). He told her a story about being in a cable car taking Kissinger and a bunch of the company losers to the world's highest and most awful copper-gold mining operation nevertheless in a spectacularly beautiful environment around 15-17,000 ft.

Sorry to burst your bubble but John Ashcroft had 6 Vietnam Deferments, Ashcroft is the Chesty Puller of Chicken hawks!