I'm surprised my buddy Billy the Scrap Merchant hasn't made it out there by now. Heh ...

He'll probably be along. I hope he brings his camper. The B&Bs'll likely be full... 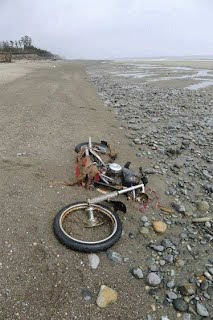 Now we are seeing the first trickle of that debris. A ghost ship arrived in the Gulf of Alaska this spring. A rusting Harley Davidson from Miyagi prefecture was discovered on a remote beach in British Columbia. A soccer ball found on an Alaskan island and marked with a personal message was returned to its delighted teenage owner in the tsunami-devastated town of Rikuzentakata.

Like dreams — or nightmares — these wayward bits of other people's lives bring us closer to the distant disaster. They make the world smaller. A number of groups have started projects to reunite recovered possessions with their former owners. And one beachside town in Oregon is hoping tsunami "treasure hunting" will result in increased tourism.
...

Experts also say the debris is not likely to be radioactive. [...]

Not so fast, Sparky. It looks like the radioactivity is getting here under its own power:

Pacific bluefin tuna carried radioactivity from Japan’s 2011 Fukushima Daiichi nuclear disaster all the way across the ocean to the shores of California, scientists reported Monday.
...

The amount of Cesium 134 and 137 detected in the fish “didn’t come close to exceeding safety limits,” Madigan said, noting that what was in the fish, per gram, is lower than the amount of naturally occurring radioactive potassium found per gram in a banana.

Whew again! I'm safe! I ate a banana in 1948 and was sick for a week. The next time I ate one was I ate a slice of banana cake by accident at a party in 2008. Didn't get sick that time, probably because it was diluted. I used to get nauseous when I'd go past an auto body shop back when they used banana oil in the paint. Mrs. G loves the damn things and they were a very effective birth control device. Yuck.

Sushi? Not on your life! Us saltwater fishermen also call it "bait". I will admit to serving salmon eggs to my guests as fine caviar. Dirt cheap and tasty on good toast points and no one ever caught on. I also put $5 a quart vodka in Grey Goose bottles, but that's another story. No one caught onto that one either. But I digress...

Watch for a barrage of positive ads from the tuna/dolphin canning industry much like the ExxonMobil ads on how good for the environment oil companies are.

I'm still not over the radioactive milk scare of the '60s. That was traumatic. I'm barely over the visual of ladies' breasts blinking at me whilst rotating like a lighthouse, although that was mostly the tassels. Oops, there it goes again...

Note: This post is meant to be a tongue-in-cheek look at the debris problem and hopefully will not elicit anything factual from long-winded penguins. (wink)
Posted by Gordon at 12:58
Email ThisBlogThis!Share to TwitterShare to FacebookShare to Pinterest

How soon before bluefins are their own Blue Light Special?

I'm witcha on bananas dude. My twin could eat the damn things peel and all but I would gag at the smell of one.

Mrs. G loves the damn things and they were a very effective birth control device.

Oh where does my deranged little mind go from here? Heh ...