The hunt for a mariachi suit in East L.A. 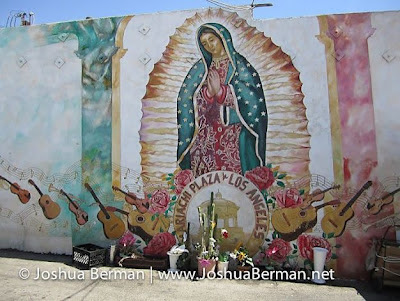 A mural and shrine in Mariachi Plaza de Los Angeles (in East Los Angeles) are dedicated to musicians.

A little light fare for Monday.

Most of us probably think of mariachis as strolling musicians whom we pay off not to play at our table, but they're part of my Los Angeles cultural heritage. Don't have mariachis in your neck of the woods? The demographics are changing. You will.

My heart sinks when I see the black gate in front of the window. "Lunes cerrado," says a hand-scrawled sign on the door of La Casa del Mariachi. Closed Mondays.

Everything I need is in the window display: the straight-cut pants adorned with silver botonaduras; matching chuleco (vest); the chamarra (short jacket); and the moño, a fluffy bow tie. These items together are called a "traje de charro," which loosely translates as "cowboy suit," and refers specifically to the outfit worn by the lead singer of a mariachi band. Sold separately and equally important: boots, belt, buckle and sombrero.
...

I pay Cesar cash, and he hands me a dark blue moño. "I wore that suit when I was in a group called Mariachi Sol de America. You can find them on YouTube," (Aqui - G) he says.

"What instrument do you play?" I ask.

"Guitarra y biguela," he says. As I begin to remove the jacket, Cesar puts his hand on my arm. "If you are going to remain in this barrio, you should keep the traje on."

That's the opposite advice I expect, a white gabacho from Colorado parading around East L.A. in a traje de charro seems like asking for trouble, but Cesar explains: "The thieves, pandilleros and gangbangers, they'll leave you alone. They respect mariachis."

Respect indeed. The pandilleros are afraid that, if approached, los mariachis might start playing!
Posted by Gordon at 14:27
Email ThisBlogThis!Share to TwitterShare to FacebookShare to Pinterest

Once, in an LA restaurant, I bribed a mariachi band to play "Kansas City". Heh ...

That musta been a little weird. Heh.

They played it quite well in fact. Heh ...