Vulture/Voucher vision harks back to the days of Taft 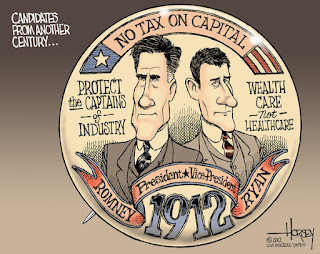 The America Ryan longs for seems more like 1912 than 2012. Certainly, it was a simpler time a century ago. The majority of Americans were white, God-fearing Protestants who lived on farms or in small towns. Only a tiny elite went to college. The rich were very rich while the broad working class earned modest incomes through long days of labor in mines, in factories and in the fields. Women stayed at home. Black Americans were kept in their place. Politicians were in the pockets of the wealthy. Only wild-eyed socialists dreamed of helping the elderly with government-provided pensions and medical care.

Over the last 100 years, the planks of the Socialist Party platform of 1912 -- items like a 40-hour work week, a minimum wage, and precursors to Social Security and Medicare -- became mainstream ideas and pillars of American life. During the liberal era, a huge middle class was created as the American economy became the most vibrant and innovative in the world. The income gap between the rich and everyone else narrowed. A college education became the norm. Most people moved to the cities or suburbs. Women left home and went to work. The U.S. became a more equal, multi-racial society.

The core question before voters in this campaign season is which ethic -- conservative or liberal -- will guide our society in this new century. A lot of the folks supporting the Romney-Ryan ticket are shouting that they want to take their country back, but back to what?

Can a 21stcentury nation thrive with a return to the policies of William Howard Taft?

One difference: English became the common language of the world due to the failed British Empire and then the failed American Empire. In a hundred years, the discussion will likely be in Chinese.
Posted by Gordon at 14:49
Email ThisBlogThis!Share to TwitterShare to FacebookShare to Pinterest

And of course, the Dead End Quarter is in the tank for them. Half those assholes were saying they'd never vote for Romney 6 months ago, now they're the 'saviors' of the GOP.

They can all ride the anchor down together as far as I'm concerned. :-)