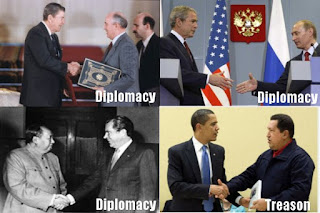 The terrorists have won!

What, now we have to have an Outrage of the Week? Seems the Rethugs never got the moral of Chicken Little.

Okay. So, like, if Obama was caught giving Chavez a hand job under the conference table, if Obama had been seen in the cloak room having seven minutes in heaven with Chavez, if Obama had been getting a reacharound while Chavez was giving him a Venezuelan pipeline treatment in his ass, we might, and that's "might," have something to talk about.

Posted by Fixer at 05:44
Email ThisBlogThis!Share to TwitterShare to FacebookShare to Pinterest