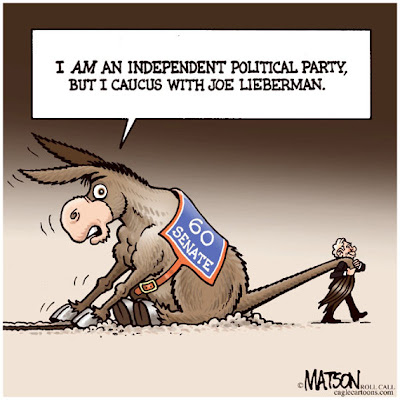 *Apologies to damn near everybody:

We are overwhelmed, yes, by tale upon tale of the sadness and horror brought on by this country's willful neglect of its citizens because we need to please some mad god of capitalism. And because we need to soothe the vanity of politicians, like Joe Lieberman.

Lieberman's gotta be punished, or they gotta get rid of Reid. There's gotta be consequences for Lieberman. He's gotta lose his Homeland Security committee chair, maybe even be ejected from the caucus. He's gotta be publicly defiled. If there was any kind of justice right now, Lieberman should be locked in a glass room with the ghost of Lyndon Johnson. Motherfucker would be on his knees after five minutes, begging to give LBJ a rim job for mercy's sake.

Or, instead, Lieberman should be forced to eat the body of Jacqueline Kelly. He should have to taste her diseased organs and mutated cells. He should have to stare at her dead face as he ingests her faded skin and deteriorated muscle. And if he can't do it on his own, he should have her bones shoved down his throat until he fucking gags. Then maybe he'll understand that we're not talking about abstract numbers of people dying. We're talking about real corpses.

Posted by Gordon at 13:46
Email ThisBlogThis!Share to TwitterShare to FacebookShare to Pinterest