The Gulf of Mexico Oil Spill Will Wreck Your Pathetic Ideology 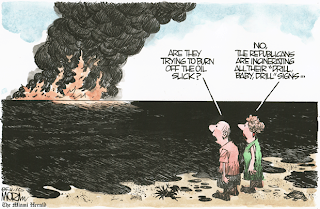 But until this happens, good, sweet conservative bags of fuck who need so desperately to drag this president down, the Gulf of Mexico oil leak is a corporate-created disaster, and it actually serves to demonstrate, starkly, and with a semen-like sheen, as if the ocean floor is in the midst of a prolonged sweet crude ejaculation, the utter failure of deregulation and the bullshit notion that capitalistic enterprises can police themselves when it comes to safety and environmental standards, whether it was, in this case, BP or Transocean or whoever. In other words, once again, as with so many things, this is about your ideology belly-flopping, much like, you know, when Katrina showed how years of neglect of the levees would lead to a nightmare.

Yes, some day soon, a man with his Gulf Shores timeshare, probably a proud and loyal teabagger, will look out over his balcony during the two weeks a year he takes his family on vacation and see the bits of black that are rolling up onto the shore. And he'll wonder, even if they do everything they can, why the feds couldn't clean it up sooner. Then he'll go inside and watch Hannity or listen to Limbaugh tell him that his taxes are too high and that business, not Washington, can solve all his problems.

Not to mention that Libruls caused this spill to make a point.

That was from Part 1 of an RP trilogy on this deal. Part 2 is here.

Part 3 will no doubt be along when the pot, coke, and Ecstasy kick in. Or the goat.
Posted by Gordon at 14:41
Email ThisBlogThis!Share to TwitterShare to FacebookShare to Pinterest