Firstly, I feel a lot better than I thought I would. I guess I'm still in half-decent shape. Heh ...

I got my tools together first. Sharp spade, ruler, square, 4' level and a little rake. 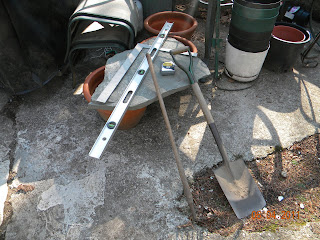 The biggest bitch was breaking down the pallet and sorting the stones according to size and shape. This should be done before laying the first stone. They vary in size from approx 3' square down to stuff as small as a computer mouse.

I started by laying out the stones for the first course in approximate position. I laid the longest, straightest edge of each stone toward the outside, measuring out from my line to keep them fairly straight. That's the big rule here. The first course has to be level. 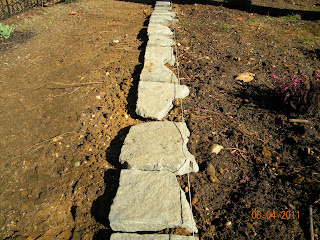 The trick is to start at the lowest side. Since the backyard is pitched to the west, I started on the west side. Once I got the first stone leveled, I moved on to the next, leveling each one to the preceding stone. 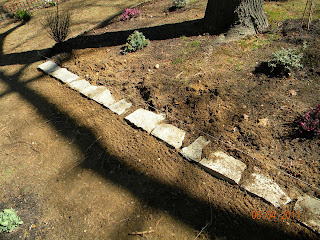 Notice I started a few feet off the corner. In my initial sorting, I picked out 4 corner pieces that were big enough to take up the whole corner, giving a good base as opposed to several small stones to make the corner. 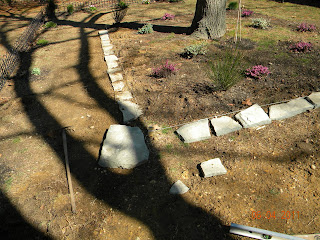 Now, in the pic above, you see the west and south sides of the garden. Thanks to the difference in pitch, I had to go pretty deep by the time I got to the southeast corner (the first course is essentially buried). So what I did was start the first course on the east side at the same depth as the second course on the south. Observe: 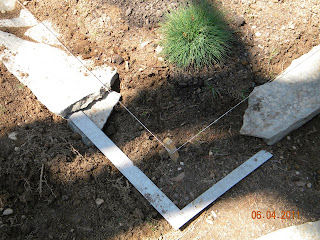 This is the same corner with the east side leveled. 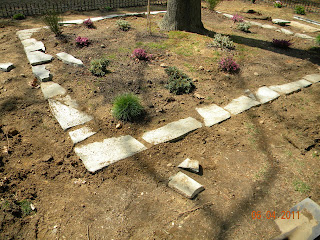 Then it's just a matter of stacking stones where they fit without wobbling. Also, the "seams" of the upper course shouldn't line up with those of the lower course. 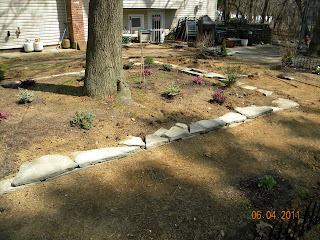 And then, after a couple hours of stacking and moving stones around, it comes together. 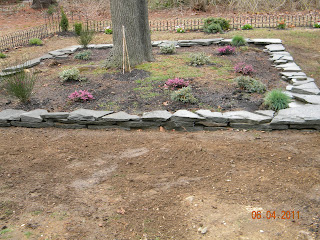 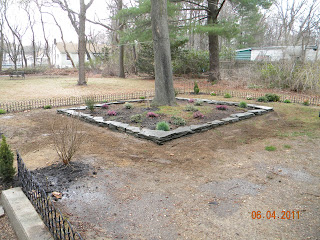 I still have to pick up some topsoil to fill in the bed up to the top of the wall, but I sure as hell ain't swinging 500lbs of soil this morning. Maybe tomorrow. Heh ...

As always, click on the pics to make bigger. If you have any questions, leave 'em in comments.

Note to John Gall: I have no idea what kind of rock this is (I'll ask Sam the next time I'm at the nursery) but if I had to guess, I'd figure either a shale or slate of the kind you see in eastern Pennsylvania, very stratified.
Posted by Fixer at 06:08
Email ThisBlogThis!Share to TwitterShare to FacebookShare to Pinterest