I hope so. Since my roof got cleared last Sunday, the weather has been mahvelous dahling! The warm temps caused my little bit of residual ice to start creeping off the roof. I whacked at it with my ice whacker to seemingly no avail. Five minutes later, whoomph! and thirty linear feet of ice came down. This is nothing, happens every few years and I have all I need to repair it in stock. 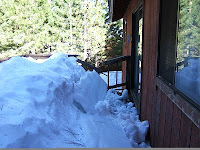 I am damn glad I had the roof de-snowed. If that had come down with 5 to 6 feet of snow on top of it the damage would have been a lot worse, and that has happened. One year we had so much ice and snow come down that it broke the deck, the railing, and the steps. We went in and out through the garage for about a month while I waited for massive chunks to melt so I could begin repairs.

This video shows the awesome power of my Honda and what's left of its winter-worn simple-minded operator. At one point about 4:00 I am about to take a cigarette break, remember the camera is running and think better of it. A coupla times you can see me having to physically pull the machine when the treads stopped motating and just churned snow.

Also, you'll hear a coupla airplanes, or maybe the same one circling to gain altitude from our 6000' airport to get over our 9000' mountains (see 'density altitude'. Pilots who don't take it into account on takeoff crash around here more frequently than you might think). Airplanes fly low over my house all the time. Whatever they're lookin' for, it's already gone.

I left this for late in the day so you could see it first thing in the morning when all your mental power is occupied with that first cuppa and a smoke. Trust me, this is not a mental workout. Heh.

Wasn't sure if my Honda could blow a way through that snowpile. With a little shovel work it can. This is the last few minutes of an hour and a half job. Took a few more minutes to clear the finished way back into the garage.

Boring I know, but my dog is always fun to watch.

Posted by Gordon at 20:22
Email ThisBlogThis!Share to TwitterShare to FacebookShare to Pinterest