Well, we finally got in the house at 11:00 last night. Once again I got jacked up leaving somewhere, subjected to a "random search" at Heathrow before getting on the aircraft (happened to me in Frankfurt once too). Thing is, when the Germans did it, it was by official federal border guards who were professional and respectful. This time, by some rent-a-cop security agents who were entirely unprofessional. My quote to them was "if I didn't have to be on this flight, I'd have you get your supervisor and then punch the lot of you out". Assholes.

Collecting the luggage at JFK was also a huge clusterfuck.

That said, we got in, unpacked the toothbrushes, and then went directly to sleep. I did manage to smuggle a hunk of cured Spanish ham and a wheel of the local goat cheese without getting jacked up at Kennedy. Heh ...

Couple things: As I mentioned yesterday, we had some lively debates aboard ship. Thing is, it was a pleasure to have discussions with people who didn't necessarily share points of view but could make their point intelligently and respectfully, unlike the things that qualify as "debate" here.

Aboard Lizzie, as well as the other two Cunard ships, is a dedicated smoking room called "Churchill's". It was there, every night after dinner, a group of about 25 of us (aside from the Brits and Americans - me and the Mrs. and a couple from Bay Ridge, Brooklyn - there was an Israeli woman and a couple Germans) would gather over drinks and talk about the world and its problems into the wee hours. It was truly enjoyable and friendly. The "Bloody Fooking Yank" remarks were made in humor and were taken as such. 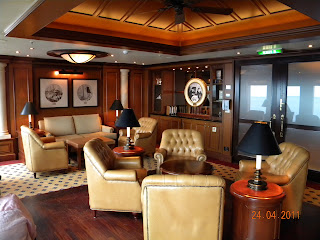 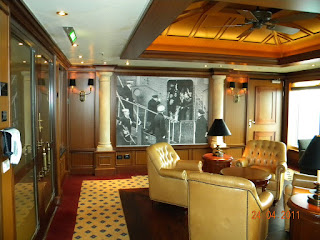 Gonna start unpacking after I finish my coffee and then I'll put up my post from Vigo, Spain, along with more views of Lizzie's interior.
Posted by Fixer at 06:06
Email ThisBlogThis!Share to TwitterShare to FacebookShare to Pinterest