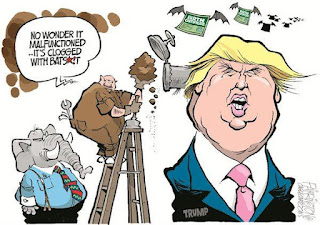 Over the past week, Donald Trump has resumed flogging his birther crusade, telling every outlet he can find that “a lot of people are questioning” the president’s birth certificate. What’s his political calculus?

None. There is no more naked celebrity in America than Donald Trump. He doesn’t do subtlety. He doesn’t do “thought.” To say he has a political calculus is a wild overstatement. His strategy amounts to no more than junior high school algebra. The equation is: Trump + infantile public statement x infinite repetitions on TV and Twitter = maximum publicity for flailing Trump products and insatiable Trump ego.

Mr. Rich gets more serious after that, but this Trump shit is more fun than a barrel of monkeys! Shouldn't be. It is, after all, just a barrel of monkeys.
Posted by Gordon at 13:02
Email ThisBlogThis!Share to TwitterShare to FacebookShare to Pinterest

If the Trumpster had a brain, he take it out and jack it off.