BUSH, CHENEY, RUMSFELD, YOO CONVICTED OF WAR CRIMES BY INTERNATIONAL TRIBUNAL IN INDONESIA
Move along folks, nothing going on here.

Needs to happen a little closer to home, like the Hague.

Iran Says It's Been Hit by Powerful Cyber Attack
Ayatollah Khamenei rails against foreign invaders who disrupted his download.

Pulled his pants up for the first time in weeks.

Study: Women Smell Better Than Men
Based on thousands of extremely awkward interviews.

"Not awkward at all!" says Fixer. Note his official interviewer shirt: 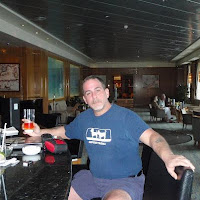 Posted by Gordon at 12:18
Email ThisBlogThis!Share to TwitterShare to FacebookShare to Pinterest

While I agree that Bush, Cheney, and others should be indicted for war crimes at The Hague, I have two words for Jakarta: East. Timor.

"Not awkward at all!" says Fixer.