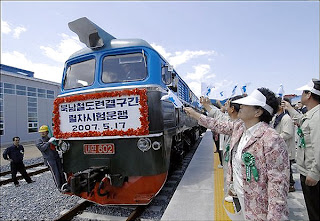 After having lived near the DMZ for a little over 3 years of my life, this story does me good:

Two trains from North and South Korea crossed the heavily armed border on Thursday, restoring for the first time an artery severed in the 1950-1953 fratricidal war and fanning dreams of unification.

It took the two Koreas 56 years to send the trains -- one starting in the South and one in the North -- across the Cold War’s last frontier for the one-off runs of about 25 km (15 miles) one way.

It's incremental but it's something. You wouldn't believe how many families were separated by that war and the ensuing armistice. A divided Korea should go the way of a divided Germany.

Off to the shop ...
Posted by Fixer at 06:08
Email ThisBlogThis!Share to TwitterShare to FacebookShare to Pinterest