Right-wingers are the same everywhere

Fact-free and fucked up. From The Rude One: 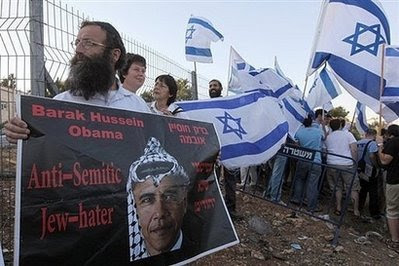 That's President Barack Obama there, made to look like Yasser Arafat, thus demonstrating that Photoshop is available to any right wing tool anywhere, in this case Israel, don't you know, from a Monday protest. Man, between Hitler and Arafat, that Obama must be licking his chops to get the gold in Rahm Emanuel's teeth.

The teensy-weensiest hint that there might some day be a little bit of criticism of right-wing Israeli human rights abuses is enough to set these crackpots off. They're just like our wingtards. Some things are universal. What a comforting thought. Oy.
Posted by Gordon at 12:45
Email ThisBlogThis!Share to TwitterShare to FacebookShare to Pinterest