TPM must have a guy who just looks for weird Repug shit. I think I found him.

GOP Candidate: Obama And Carnahan Want To Take Away Your Chance To Find The Lord (AUDIO)

Un-fucking-believable, but people'll fall for it.

Normally I wouldn't touch that line (much less Moosebreath!) with your sausage, but I liked this photo that was in the piece: 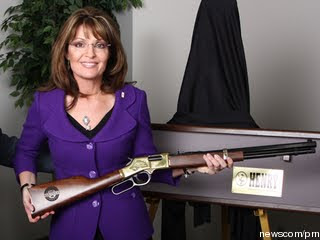 That's a beautiful Winchester Model 94 (I think) she's holding. It's some kind of commemorative edition, way too pretty to beat up in a saddle scabbard. Probably in .30-30, reputedly one of the best and most rugged short range brushpoppers ever. I had one of those that I had to send back to the factory because I couldn't hit jack shit with it. I think they straightened the barrel or something. I sold it to a buddy for what I had in it and he filled his freezer with it every year up in Idaho. Probly still does. If it was still as inaccurate as it was when I had it, he'da had to hold up liquor stores with it to eat...

Maybe they use the bad barrels for commemorative editions, probably rightly figuring folks'll hang 'em on the wall and never shoot them.

Absolutely fitting for Palin: a tarted up plain jane, symbol over substance, costs more than it's worth, and inerringly shoots wide of the mark. They should get her nips hard, then freeze her and hang her on the wall. Best use.

I don't know what that is right behind her. Coffin fulla reindeer jerky, maybe.
Posted by Gordon at 13:57
Email ThisBlogThis!Share to TwitterShare to FacebookShare to Pinterest