Beck Mission to the Jews 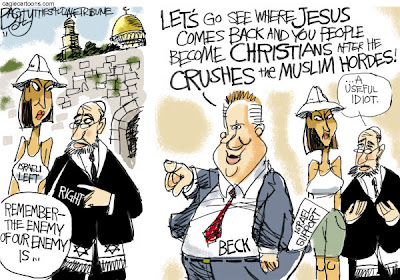 A coupla years ago I recommended The Yiddish Policemen's Union by Michael Chabon. I'm doing it again.

In the novel, the State of Israel is founded in 1948, but is destroyed after only three months in an alternative version of the Arab-Israeli War. Without Israel, Palestine is described as a mosaic of contending religious and secular nationalist groups locked in internecine conflict; Jerusalem is described as "a city of blood and slogans painted on the wall, severed heads on telephone poles".[2] The United States president believes in "divine sanction" for neo-Zionism, a movement seeking for Jews to reclaim Israel once again.

In February 2008, Rudin told The Guardian that a film adaptation of The Yiddish Policemen's Union was in pre-production, to be written and directed by the Coen brothers.


Oy! To die for! Look what the Coens did for Fargo and Jeff Bridges! Not to mention O Brother, Where Art Thou?!

Posted by Gordon at 14:30
Email ThisBlogThis!Share to TwitterShare to FacebookShare to Pinterest

The Likudniks are just as fucked up as the teabaggers. We should just make Israel the 51st State and make them pay taxes for all the bullshit they add to our existence.

That's two more right-wing Senators. How many Likud/teabagger/right-wing Congresscritters will they get?

Down the Rabbi hole----too funny even for Beck.

Oy, indeed. All this trouble with Israel is why my eldest son says we should have simply given them France instead....