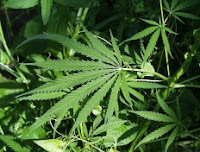 Could this plant be a new wonder-drug?

Nothing new about it! From Raw Story, links and video:

The cancer-killing properties of marijuana were the subject of discussion in a PBS documentary that aired this week to little media fanfare.

While using marijuana to kill cancer may sound like a wild claim to some, it struck Dr. Prakash Nagarkatti as a great idea. In his studies as professor of pathology and microbiology for the University of South Carolina, he tested synthetic cannabis drugs on cancer cells and developed a formula that was able to completely eradicate cancer cells in a test tube.

A follow-up on mice afflicted with cancer found that up to 30 percent in the test group completely rejected their disease, while others had their tumors significantly reduced. The same drug is now being tested on humans with Leukemia.

But it’s not just Dr. Nagarkatti who sees the medical value of marijuana: it’s the whole pharmaceutical industry. And that’s another point the documentary makes, examining the patents various companies have filed, and what they claim marijuana-based drugs could one day be used to treat.


The never-right denies science. This may change on this issue when Big Pharma tells their pols how much money there is in weed for them and that they, the pols, should A) step up the war on imported and home-grown weed, and B) proceed at flank speed to let Big Pharma control the supply by telling the sheeple that mota is now the American Way and good for what ails them as long as it's from the good right-wing bought-and-paid-for Government-Approved Source.

I'm looking forward to legalization, nay, active promotion of marijuana, never mind by whom. People will smile more and California's financial problems will be over shortly after the next harvest.

Posted by Gordon at 13:48
Email ThisBlogThis!Share to TwitterShare to FacebookShare to Pinterest

Marijuana will not be legal until Joe Biden (D - Dupont Corporation) has all of the patents in his owner's names.