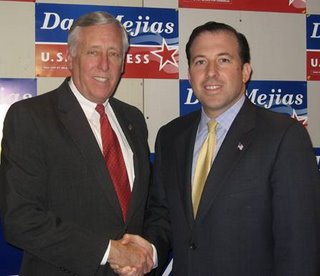 It's nice to see the Dem leadership making the campaign rounds with the candidate:

FARMINGDALE - Yesterday Democratic Whip Steny Hoyer of Maryland visited New York's Third Congressional District in a show of support for Nassau County Legislator Dave Mejias, Democratic Candidate for Congress. During the visit, Hoyer and Mejias talked about the failures of Peter King and this Republican-controlled Congress to protect New York because of their refusal to provide necessary oversight. Because of these failures New York's homeland security funding was cut this year by 40%, Homeland Security contractors are unpunished when significant waste, abuse and mismanagement occurs, and the 9/11 Commission recommendations have not been fully implemented...

"This Republican-led 'cover-up Congress' has been complacent and complicit in rubber-stamping virtually everything the Bush Administration has asked for," said Hoyer. "We believe Dave Mejias is going to win. Americans want a change. Incumbents like Peter King offer only the status quo while Democratic challengers like Dave Mejias provide an opportunity to take our country in a new direction." [my ems]

You're damn right Dave is gonna win. Would have been nice to see the big shots from the party on Long Island a couple months ago but better late than never.

Vote for Dave Mejias. Do you live in NY-03?
Posted by Fixer at 05:26
Email ThisBlogThis!Share to TwitterShare to FacebookShare to Pinterest