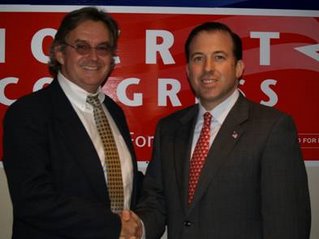 FARMINGDALE - Former Ambassador Joseph Wilson came to Long Island today to campaign with Nassau County Legislator Dave Mejias, Democratic candidate for Congress in New York's Third Congressional District. While on Long Island, Wilson and Mejias spoke to members of the press about the failures of Peter King and this Republican-controlled Congress to provide the necessary oversight their positions demand because of blind partisanship. Our country was mislead into a war with no end in sight, because Congressmen like Peter King were too busy vying for power instead of asking the tough questions. Now that King is Chairman of the Homeland Security Committee, he is a reliable rubber stamp for George Bush, and has voted with the President 100% of the time on matters of Iraq.

"Peter King cares more about keeping his job than doing his job," said Mejias. "Our young men and women are fighting and dying in Iraq with no end in sight because Peter King and the Republican controlled Congress rubber stamped Bush's failed policies. King is President Bush's most ardent supporter; he votes lock step with President Bush and refuses to recognize the severity of the situation in Iraq. King recently said that downtown Baghdad is as safe as downtown Iraq, and stood by his statement that 95 percent of Iraq is secure and safe."

Former Ambassador Joseph Wilson gained national attention in July 2003 when he penned an opinion-editorial article in the New York Times questioning President Bush's rationale for going to war in Iraq. Shortly thereafter, Bush administration officials disclosed to the press that his wife, Valerie Plame, was a CIA officer who held non-official cover status. Wilson has been campaigning across America for various Congressional candidates and came to Long Island to lend support to Dave Mejias, who he calls the personification of the American success story.

"This is the most important election of my life, it is about restoring accountability in American Government and this can only be done with a Democratic majority in Congress," said former Ambassador Joseph Wilson. "The Republicans have marched lock step in every way behind George Bush and his White House minions sacrificing the Constitution of the United States on the altar of misplaced partisan loyalty."

At today's press conference Dave Mejias and Ambassador Wilson were joined by U.S. veterans Tom Cleere, Richard Wood, George Olenick, and Al Britvan. Tom Cleere, a former United States Army Captain and Iraq war veteran spoke at the event. "I served in Iraq and I can attest that Downtown Baghdad is not as safe as Downtown Manhattan, Peter King is out of touch with the realities in the Middle East. I have known Dave Mejias for many years, I am confident that Dave will better represent us in Congress because he knows about honor, commitment and the need to ask questions; all qualities that I learned about during my service in the Army."

While introducing Ambassador Wilson, Dave Mejias commended Wilson for his great service and unwavering dedication to our Country. "I greatly admire Joe Wilson's courage and determination," said Mejias. "It is no wonder he chose Dante Alighieri's quote 'The hottest places in Hell are reserved for those who, in times of great moral crisis, maintain their neutrality' from The Divine Comedy as the epigraph in his book The Politics of Truth." [my ems]

Vote for Dave Mejias. Do you live in NY-03?
Posted by Fixer at 05:37
Email ThisBlogThis!Share to TwitterShare to FacebookShare to Pinterest