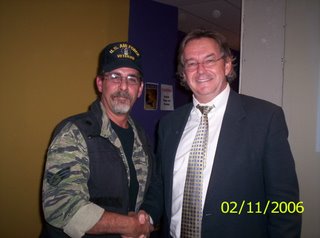 Just wow. Joe Wilson is amazing. The detail he keeps in his head, names, dates, places, and he spoke off the cuff for about 20 minutes. He and the candidate took turns slamming Peter King and George Bush and I had to stop myself from just yelling out 'you tell 'em, boys'. Ambassador Wilson spoke of Karl Rove and Scooter Libby as "toadies, lickspittles, and traitors".

We spoke for a few minutes afterward about his problems with the administration and the hassle they've had since his wife's outing at the hands of BoobBob Novak. He related that Peter King said it was "a good thing" Valerie Plame was outed. Their civil suit against the administration is moving forward; I hope they put the screws to 'em. He told me his problems were nothing compared to what our troops face in Iraq. I also wished him and his family well from the staff here at the Brain and he said he'd check us out.

Happily, Dave didn't drag my ass over to say anything this time (My prepared remarks posted here if you're interested.) and after the press conference, the candidate and the ambassador waded into the crowd outside Mejias Headquarters. 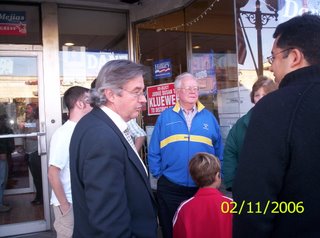 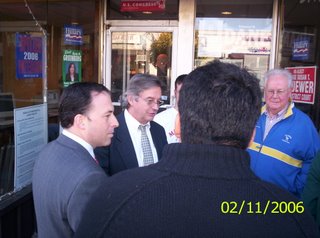 And a little 'inside baseball': I've been bugging Mr. Mejias about his wearing the same tie to every appearance. It's a beautiful red, white, and blue striped affair and he loves it. The first thing he says to me when I walk into the office today is, "look, Rich, I got a new tie!"


Learn about the candidate and volunteer - Dave for America

Vote for Dave Mejias. Do you live in NY-03?
Posted by Fixer at 15:55
Email ThisBlogThis!Share to TwitterShare to FacebookShare to Pinterest