The president spent much of the hour-long televised session in the East Room addressing skepticism about his government's assertions regarding Iran and fears of a widening regional conflict. "The idea that somehow we're manufacturing the idea that the Iranians are providing [explosives] is preposterous," Bush said. Repeating a reporter's question, he added: "Does this mean you're trying to have a pretext for war? No. It means I'm trying to protect our troops."

Yup, if the Chimp says it, it must be true. Pardon me if I don't believe it. At this point, unless the Chimp shows me pictures of Ahmedinejad riding a bomb like Slim Pickens, I ain't gonna believe shit coming from the White House. There's 3100 new markers in Arlington and we still haven't found Saddam's WMD. How many more lives are we gonna waste looking for Ahmedinejad's? 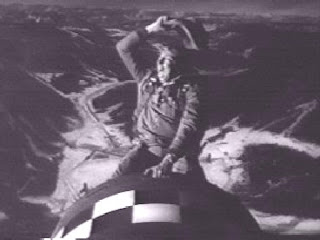 Welcome to readers of Salon's Blog Report.
Posted by Fixer at 05:41
Email ThisBlogThis!Share to TwitterShare to FacebookShare to Pinterest