Or, be very scared* of this woman. 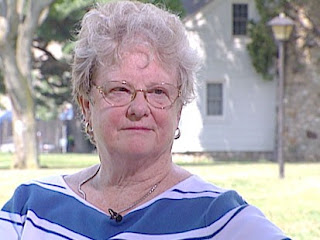 You see, though she might look like a sweet old broad, she was carrying ... ice packs. And they had ... duct tape (or something) on them. And well, we all know she was really testing airport security for Osama and all them bad al-Qaeda guys. You know, the ones were "fightin' over there"?

An unsuspecting senior citizen from Long Island, N.Y. is behind one of the incidents that prompted the TSA to issue a bulletin last week about cases in which they suspect terrorists may have been probing airport security by trying to bring peculiar items on board airplanes.

In her case, Sara Weiss tried to bring ice packs on her flight home.

"I'm not a terrorist. I'm just a 66-year-old woman who's coming back from visiting her son and I have a bad back, so I carry these things," Weiss told ABC News' Lisa Stark.

Yeah, that's what they all say, Grandma. Orange jumpsuit and a free trip to Gitmo for you, honey. Now shut up and spread 'em, it's time for the cavity search.

What is this fucking country coming to when we're jacking up grandmothers and putting little kids on the no-fly list?

*Great thanks to Blondie for the link.

[A big welcome to Skippy the Bush Kangaroo readers.]
Posted by Fixer at 05:36
Email ThisBlogThis!Share to TwitterShare to FacebookShare to Pinterest