In a comment on my earlier post, Gordon said: "We will, of course, require photographs of this marvel as it develops." Ask and ye shall receive:

Yesterday, I laid out the perimeter and the bed around the tree. There was nothing here but the big ol' maple and the gnarly old wisteria in the corner (you can barely see it on the far left in the 2nd pic) When I was a kid, this was my baseball field (home plate was about 10 feet to the right of the maple). When I took these two, I'd started putting in the heather and creeping juniper. 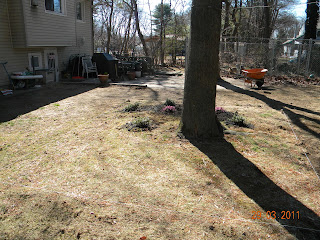 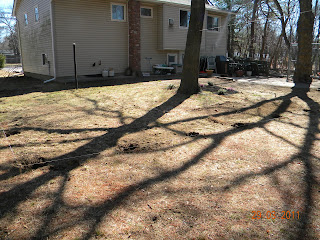 Today, I planted the rest of the shit around the tree and the anchor shrubs in the perimeter. The lilacs are on the perimeter, every 5 feet, but they're hard to see. They came as saplings (see 3rd pic) and they are tiny. If I knew they would have been this small, I would have waited and bought mature bushes. I can just picture my yard rabbits having a field day with them but we'll see by morning. Might be the last thing they eat (where's my .22). Heh ... 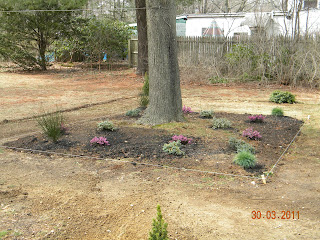 I put this in comments (for our pal Jay in NC) but it'll probably be easier here (using the above pic as reference):

On the corners are Dwarf Alberta Spruce
In the middle is a Japanese Holly
The Lilacs are of the Old Fashioned variety, standard color 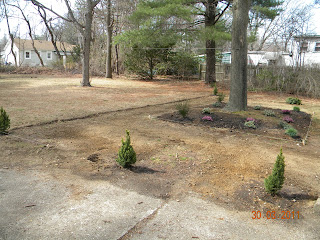 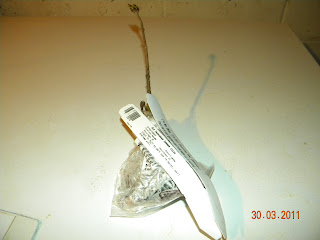 I still have to get the stones for the border around the tree and I have to head up the street to 9 Brothers Gravel Yard (a good, mostly, buncha Italian boys who I went to school with) to look at flagstones for the walking areas.

If anybody wants to know which shrubs are which, let me know and I'll put up a list of what I used.

So I got a little carried away this morning. Heh ... I added some depth to the perimeter, pairing an English Dwarf Boxwood (l) with the Alberta Spruces. In front of the old Wisteria(r), I put two more clumps of the Blue Fescue and Sweet Flag Variegatus. I also stuck a Blue Pacific Shore Juniper(c) with the Japanese Holly.

Thankfully, I got everything planted before the rain really started, but it's been a constant drizzle all morning. I wasn't gonna take the little mud balls dogs out with me but the Mrs. is in Hartford on business and I'd be damned if I trusted the two of them alone in the house for 4 hours while I'm playing in the dirt. 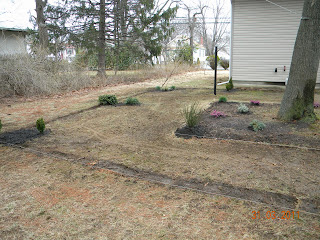 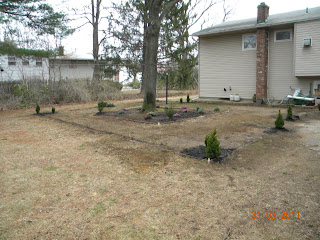 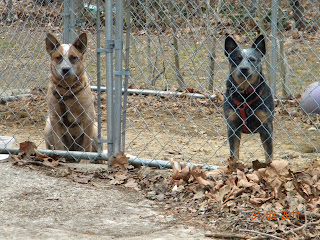 Now you have us out in the rain?

Posted by Fixer at 14:50
Email ThisBlogThis!Share to TwitterShare to FacebookShare to Pinterest