The ones who really remember

I used to do this, but I gave up when the Army and Navy Vets around here decided they knew more about flag details and close order drill than an old Marine and embarrassed the crap outta all of us in front of the civilians. We made F Troop look professional.

Note to the 4th gent from the left: Next time, wear sunglasses so we won't see you close yer eyes when the boomstick goes off. Marines are laughing. Heh.

Seriously, good on these guys. They're nicely uniformed and they have BFAs so the rifles will chamber the next round by themselves. Cocking those things by hand in between shots makes the whole show look like a monkey fucking a football. My VFW mob used two bolt-action WWI Enfields that we borrowed from the local American Legion post, so we had to work the bolts. We should have practiced with them but we just showed up and did it. I got to hold one, and the fellow who held the other one had actually been shot at in service. By a cab driver in Germany he tried to stiff. Yes, the monkeys became aroused if not the football.

We showed up in honor of our comrades who couldn't, but these old soldiers look a lot better. 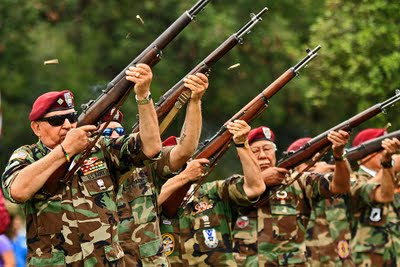 Thanks to the LATimes.

Posted by Gordon at 15:02
Email ThisBlogThis!Share to TwitterShare to FacebookShare to Pinterest