I love the wide eyes, the long fall, the puff of dust... 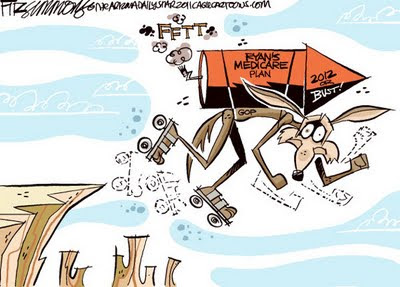 The Coyote mythos is one of the most popular among Native American cultures. Coyote is a ubiquitous being and can be categorized in many types. In creation myths, Coyote appears as the Creator himself; but he may at the same time be the messenger, the culture hero, the trickster, the fool, the clown. [...]

But the hungry and mythical trickster Coyote is waiting, as always, in the shadows to add a strange and deadly new twist.

Myth, trickster, fool, clown. The blanketasses described the Repugs perfectly centuries ago. Musta been the peyote...

No wonder there's a war on drugs.

Donald Trump: Ryan’s Plan Is A ‘Death Wish’ For GOP

I hope Trump's right for once even if it screws up his batting average. Even a blind pig finds an acorn once in a while.

People with a 'death wish' usually connect if they're serious about it. I wish the GOP much success.

Mr. Ryan may claim — and he may even believe — that he’s facing a backlash because his opponents are lying about his proposals. But the reality is that the Ryan plan is turning into a political disaster for Republicans, not because the plan’s critics are lying about it, but because they’re describing it accurately.

"Twisting his words by repeating them verbatim". Thank you, Tina Fey!

What the Ryan plan is, instead, is an attempt to snooker Americans into accepting a standard right-wing wish list under the guise of deficit reduction. And Americans, it seems, have seen through the deception.
...

What of Mr. Ryan’s hope that voters will realize that they’ve been lied to? Well, as I see it, that’s already happening. And it’s bad news for the G.O.P.

Good news for us.
Posted by Gordon at 13:03
Email ThisBlogThis!Share to TwitterShare to FacebookShare to Pinterest