I was awakened this morning about 5 by a flash of light (even through the dark curtains) from my balcony and an excruciatingly painful noise running down our (port) side of the ship. Immediately I grabbed my robe and rushed to the rail, expecting to see the wreckage of a smaller craft, that's how bad it sounded. I looked for flares, or anything else that would indicate a distress signal, and prepared to call the bridge. Two seconds later, a lightning bolt impacted the sea not a hundred yards from my position and then I was nearly knocked over by the peal of thunder directly over the ship. Surprised the shit out of my ass. So did I go back in? Nah, I sat on the balcony with my camera trying to catch the awesome sight for posterity. Neither my relexes nor the camera would cooperate. You can't bottle lightning but I did, however, get a picture of the front we passed through once the sun came up. 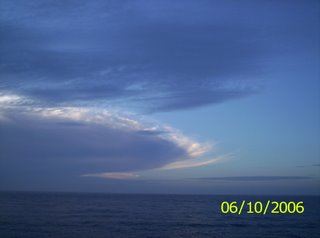 I also wrote a long post at Below the Fold on the subject of cruise ships versus ocean liners (yes, there is a distinction) yesterday if you'd like to read it.

We had a great party last night too. There are several live bands performing aboard Noordam and the featured attraction is the Nick Ross Orchestra, one of the tightest big bands I've ever heard. We partied with the usual suspects, a bunch of us who enjoy each others' company. A diverse group who are all lovely people. 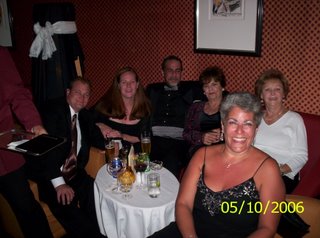 Not all were present and I'll introduce you to the absent later on. From left to right. Dave and Martha, (a newlywed couple from Lansing, Michigan whom we have come to adore over the past week and remind us of us when we were 15 years younger), yours truly, Judy (and her husband Glen who's missing because he had a blackjack tournament in the casino) from San Diego, California, the beautiful Mrs. F, and Loretta from Ventura California who is also Judy's aunt (she is one impressive woman who worked for the USO during WW2 at the St. Louis Canteen). Our friend Bob from Columbus, Indiana was also in the casino but a very lovely 83 year old man who was traveling alone until he met up with us. We all manage to close one of the bars on this barge every night.

More later, we're heading out to Punta Gordo Ponta Delgado (I been calling it Punta Gordo all week in honor of our esteemed Jarhead and it just slipped out), the Azores in a little while and I'll have more pics up either tonight or tomorrow.
Posted by Fixer at 05:40
Email ThisBlogThis!Share to TwitterShare to FacebookShare to Pinterest