More of your base are belong to us 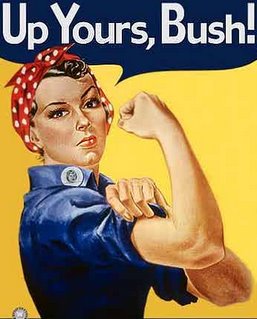 I served as part of the superb Deval Patrick/Tim Murray ground team. Volunteers from all over Massachusetts were able to participate in a Get Out Our Vote effort that gave Democrats in Massachusetts a real mandate for change. Team Patrick had field organizers who worked with their own communities, with volunteers from union members to students to moms to veterans to little old ladies doing whatever they had time to do and more. On Election Day I stayed until the polls closed, making phone calls and then I went out and knocked on doors, ready to give a ride to the polls then and there if necessary, and I wasn't the only one. I believe grassroots efforts like this played a significant role in the Big Blue Force that pulled our country back from a fascist precipice and I feel safer already.
And thank you Dean for the 50-State Strategy. We didn't win them all but if you face your enemy at every point you're not going to win every single battle. However, all of us, our nation, and the whole planet are winners and we owe plenty to those who didn't triumph this time. Connecticut didn't make Lamont its junior Senator, but Lamont ran a principled, issue-driven campaign that won him great admiration in CT and New England. Like many Democratic candidates who lost, including Dave Mejias and Charlie Brown, Lamont has gained 'name-brand' recognition and put important issues to voters. (I guess we can never underestimate the power of incumbency and Republican gerrymandering.) An example is Jerry McNerney, who beat Pombo in CA-11 in 2006, but remember, he lost decisively in 2004 and stuck with it. We have a bunch of high-quality candidates out there who I have high hopes for in 2008. Ohio barely sent mean Jean back to the House but we are also sending Fighting Dem, Netroots candidate Jim Webb to the Senate. I first heard of him via blogs. Not on national or local news and not in the national or local papers but right here on the internet. Blogs helped set the stage and the voters of VA brought it home. (I guess Allen must be thinking in that allenesque way, what a difference a macaca makes.) I contributed to Webb's campaign through ActBlue. I also contributed to Tester, Brown, Mejias, Paccione, Lamont... (And considering that I was laid off a bit over a week ago I have to say that I am kinda glad the midterms are over. Now I can take my finger off the button before my wallet explodes and concentrate on getting a job.) In short this was a great win for the Dems, particularly in the face of the lies, distortions, and attacks of the GOP, not to mention an alternate brainless media that has not been doing its job. Who would have thought, two years ago, that we would see the fall of the Republican majority come so soon? (Alternate Brain, Jo Fish and Main and Central kept me from utter despair.) The Dems have taken back Congress and I think this shows that a solid majority of rational people can prevent a fundamentalist minority from hijacking American politics, and that is something to celebrate. As Gordon noted yesterday, Ya done good, Americans. You beat the biggest criminal political machine in history by a knockout.
Posted by Nina at 17:30
Email ThisBlogThis!Share to TwitterShare to FacebookShare to Pinterest