Now, the New York City Police Department is a professional organization. Regardless of their faults, they do keep a lid on a city of 8 million, no small task. Most cops in this area have seen everything (try to give one of 'em a line of bullshit and see what happens), but there's some shit they're just not prepared for. To wit:

It happened on 144th Street and 85th Avenue in the Jamaica section.

A mounted trailer has been dispatched to transport the cow, though the animal is not in custody yet.

Police say the animal was spotted at approximately 9:43 p.m. Tuesday.

They say they don't know where the cow came from. An investigation is still ongoing. 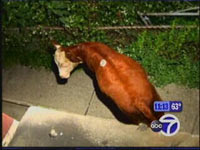 Heh ... I love NY.
Posted by Fixer at 05:09
Email ThisBlogThis!Share to TwitterShare to FacebookShare to Pinterest