And while we're on the subject ...

Regulars here know I'm an unabashed, unrepentant beer snob. My regular beer is Newcastle Brown Ale. The best beer in the world is made in Belgium and next is Germany (not Becks). The English and Irish run a close tie for third. That's the way it is, like the Laws of the Game (I don't take too many things seriously but beer and football are almost religious things for me).

That said, I regularly rag on American beer and rightly so. Most beer that's mass produced here is, what my German family calls it, American Goat Piss. There are a couple I love. One is Sam Adams Noble Pils and the other is Yuengling Lager. The Sam Adams is a seasonal brew but you can get Yuengling all year round. 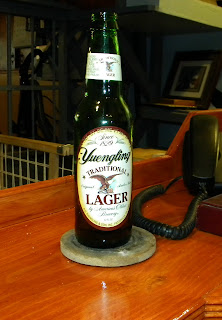 It's relatively inexpensive (it ain't PBR but they won't take your nuts at the checkout either) and it goes pretty well with rich foods, especially pizza. If you want an alternative to Bud and its ilk, this is good without breaking the bank*.

*Speaking of banks, Banks Beer from Barbados (if you can find it in your area) is a wonderful change of pace. So is Balashi from Aruba.

Posted by Fixer at 15:18
Email ThisBlogThis!Share to TwitterShare to FacebookShare to Pinterest