SheaNC brings us back almost 20 years, to those heady conservative days of the Reagan Era.

"And now the liberals want to stop President Reagan from selling chemical warfare agents and military equipment to Saddam Hussein, and why? Because Saddam 'allegedly' gassed a few Kurds in his own country. Mark my words. All of this talk of Saddam Hussein being a 'war criminal' or 'committing crimes against humanity' is the same old thing. LIBERAL HATE SPEECH! And speaking of poison gas... I SAY WE ROUND UP ALL THE DRUG ADDICTS AND GAS THEM." - Rush Limbaugh, Nov. 3, 1988

See, it's still all the liberals' fault.

For not sourcing this properly. Wish it was true but it's not.

Although the political intent of the 1 August 2004 Boondocks strip was clear, the context that it was not really a repeat of a strip from 3 November 1988 and did not report something Rush Limbaugh actually said over the airwaves on that date went missing in action, and the text of the strip has since been passed around the Internet as if it were a genuine transcript of a portion of a 1988 Rush Limbaugh broadcast.

Although leave us not forget: 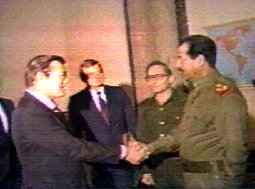 Posted by Fixer at 05:35
Email ThisBlogThis!Share to TwitterShare to FacebookShare to Pinterest