Back from the Mejias press conference this afternoon. Being an agitator as opposed to a journalist, I didn't know what to expect. We showed up early (the Mrs. accompanied me) and hung around waiting for the candidate. Personally, I figured he'd show up with an entourage but instead I spotted him coming up the sidewalk alone, stopping to say hello to one of Nassau County's finest who was there to keep things orderly. It was easy duty for the cop. 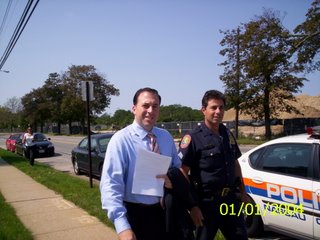 He said hello to us, and to the big shots from the Long Island environmental community, and then, in the shadow of one of Nassau County's dirtiest Superfund sites, laid out the ways Peter King has failed Long Island in the environmental arena. 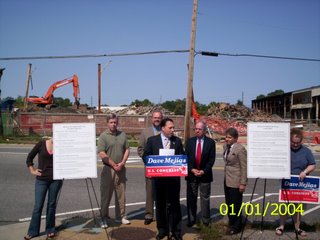 And then the candidate told us about his accomplishments ...


... Among a host of others before the environmentalists took their turns praising the candidate and giving their endorsements.

After the press conference Mr. Mejias spoke to the Mrs. and me for a few minutes, explaining that on his watch, the miserable eyesore across the street would be nothing but a bad memory. Of course, I got the Mrs. to take an obligatory snap of Mr. Mejias and me. 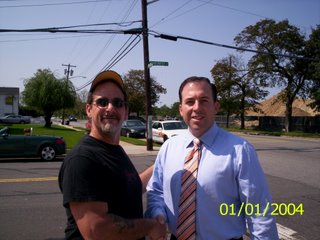 And I should add, Mr. Mejias, in his speech, managed to link Peter King and the Chimp at every opportunity. Good man.

*Press conference edition.
Yes, I know about the dates on the pics. I was dicking with my camera and reset them accidentally. Sue me. Click the pics to embiggen.

Posted by Fixer at 15:36
Email ThisBlogThis!Share to TwitterShare to FacebookShare to Pinterest