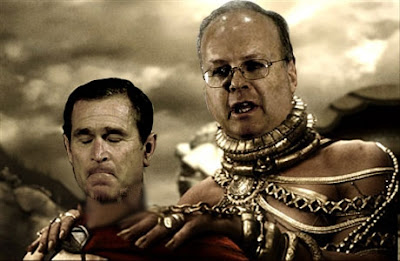 Right about now, George W. Bush probably fancies himself Leonidas, the leader of the vastly outnumbered Spartan army, defiantly bucking the odds as those sturdy old Persian warlords Leahy and Conyers bellow, "Our subpoenas will blot out the sun!" Because this generation's mentally- and morally-crippled answer to Leonidas petulantly responds with, "Then we'll do our finaglin' in the shade... like we always do." However, Bush is no King Leonidas, the tax-hating man credited with winning the Persian War. He's more like that wily and treacherous con man Themistocles.

That the Gang That Can't Think Straight suffers from memory lesions when it comes to who attended what meeting, when, what was discussed and who pushed the button to out this agent or fire that attorney.

Iran-Contra? Isn't that some new hippity hop group? Help me out here, Mommy.

The major difference between the actual Themistocles and his latter day counterpart is that the real thing only pretended to commit treason.

Bush is for damn sure not like Leonidas, a man of honor who sacrificed his band of Spartans to allow other Greeks to escape and regroup so they could fight again. Bush would have run behind his mommy's skirts to get out of danger.

A Wiki-history of The Battle of Thermopylae if you're interested. Shorter: the Greeks lost the battle but eventually won the war.

Bush isn't going to.
Posted by Gordon at 12:37
Email ThisBlogThis!Share to TwitterShare to FacebookShare to Pinterest