The Jarheads are cracking down on big tattoos. According to our good pal Deuddersun, even mine (pictured below) wouldn't be allowed. Ol' D puts it best:

If you want a tattoo larger than the illustration above in a place visible in your "workout shirt", you may be out of luck! These guys may be going off to die, leave them alone ferchrissake! The article claims that HQMC says large tattoo's are disruptive to the image of the Corps! What?

We are Bad-asses! We are trained to be Bad-asses! This is body-art to these guys! It's their War Paint! Stop treating the most efficient killers in the world like a bunch of Alter Boys, willya? [his em, he was yellin']

Indeed, my friend. I'm starting to wonder about the Jarheads. That four-star at JCS sure ain't much of one, not compared to the Marines I know, and this stupid shit takes the cake. What are they gonna do to the guys who've got 'em already? How are they gonna know when a guy got his? This is a clusterfuck waiting to happen. Just make sure they can shoot straight and follow orders and don't worry about their body art. The scars they get from live rounds and shrapnel look worse. 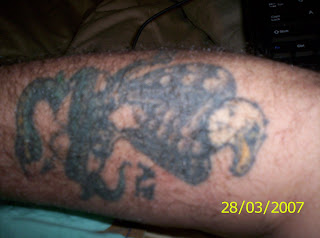 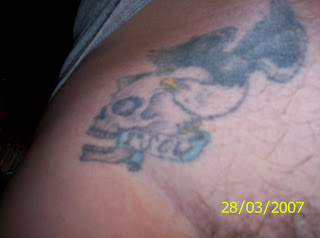 Tangentially related to this and Gord's post. Nicole at C & L gives me the link to this piece by Gen. McCaffrey:

The Iraq war has left the U.S. military "in a position of strategic peril," retired Army Gen. Barry McCaffrey has warned in the wake of a recent trip to Iraq.

"Stateside U.S. Army and Marine Corps readiness ratings are starting to unravel," he writes. "Ground combat equipment is shot in both the active and reserve components. Army active and reserve component recruiting has now encountered serious quality and number problems .... Our promotion rates for officers and NCOs have skyrocketed to replace departing leaders. There is no longer a national or a theater U.S. Army strategic reserve."

Noting that the Army "will be forced to call up as many as nine National Guard combat brigades for an involuntary second combat tour this coming year," he adds that [m]any believe that this second round of involuntary call-ups will topple the weakened National Guard structure – which is so central to U.S. domestic security."

The military is a fucking mess and they're worried about the Marines' tattoos. Good. God.
Posted by Fixer at 18:56
Email ThisBlogThis!Share to TwitterShare to FacebookShare to Pinterest