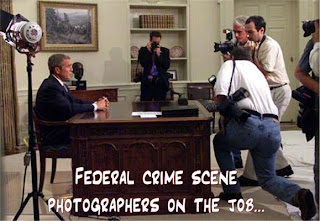 President Bush wants to keep everything that happens in his White House secret, but when it comes to his own emotions, he's as transparent as a teenager on MySpace.

On Monday morning he observed the Iraq war's fourth anniversary with a sullen stay-the-course peroration so perfunctory he seemed to sleepwalk through its smorgasbord of recycled half-truths (Iraqi leaders are "beginning to meet the benchmarks") and boilerplate ("There will be good days, and there will be bad days"). But at a press conference the next day to defend his attorney general, the president was back in the saddle, guns blazing, Mr. Bring 'Em On reborn. He vowed to vanquish his Democratic antagonists much as he once, so very long ago, pledged to make short work of insurgents in Iraq.

Yeah, like that worked. Let's hope it works as well again.

Mr. Gonzales's career has been laced with such narrow escapes for both him and Mr. Bush. As a partner at the Houston law firm of Vinson & Elkins, Mr. Gonzales had worked for Enron until 1994. After Enron imploded in 2001, reporters wanted to know whether Ken Lay's pals in the Bush hierarchy had received a heads up about the company's pending demise before its unfortunate shareholders were left holding the bag. The White House said that Mr. Gonzales had been out of the Enron loop "to the best of his recollection." This month Murray Waas of The National Journal uncovered a more recent close shave: Just as Justice Department investigators were about to examine "documents that might have shed light on Gonzales’s role" in the administration's extralegal domestic wiretapping program last year, Mr. Bush shut down the investigation.

Ah, it is good to be King! Except for the fact that we don't do kings in this country. Wrongamundo, G, we're gonna do this pretender...

[...] But in other instances, incriminating evidence coalesces around a familiar administration motive: its desperate desire to cover up the corruption that soiled what was supposed to be this White House's greatest asset, its protection of the nation's security. [...]

Please read the rest. Like always, Pop's all over this like a cheap suit.
Posted by Gordon at 15:01
Email ThisBlogThis!Share to TwitterShare to FacebookShare to Pinterest