My friend (and customer) Bill (who's a nurse at a local hospital) and I were talking the other day as I gave him a ride to work (he dropped his Toyota off for service). We both remarked about how the Republican Party has convinced Americans to vote against their best interests over the past 40 years. We're also most amazed there are such things as black, gay, and female Republicans as well but that's another post completely.

Digby illustrates this well with a chart put out by the Rethugs: 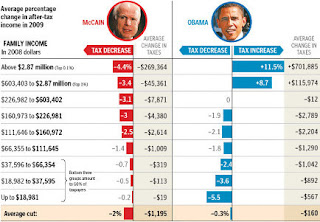 You'd think (and to me it's something that looks good for Obama) the Rethugs would be stupid to highlight this difference but, once again, they'll convince the average American that Obama's populist plan will somehow screw them. I think Digby has finally boiled it down, finally discerned what our collective problem is:

To me, the Democrats should be able to rest their case on that alone.But because the right has been so successful in portraying vast wealth as the result of some sort of Randian heroics that Americans don't grasp just what a scam McCain's tax plan really is.

I don't know how to change that. Every American seems to think he or she will be wealthy one day and therefore we must preserve the system that protects their future wealth. (I think it may be some sort of mass delusion that comes from reading too many articles in People magazine celebrating the vast wealth of talentless TV stars. ("If they can do it, I certainly can!")

Yeah, one day I'm gonna win the Megaball too.

I think many Americans have deluded themselves they're in McCain's league (as far as wealth goes) because in the last few years they've had several hundred grand (liberated from their homes' equity) to buy the boat, big screen TV, McMansion, and Corvette. Ain't nobody gonna foreclose on McCain when his ARM readjusts.

Saturday whorage later, gotta give the drywall a schmear.
Posted by Fixer at 06:43
Email ThisBlogThis!Share to TwitterShare to FacebookShare to Pinterest